My Creative Adventure, Friends, and a Little Bunny

So, it's been a couple days.   Coming off of the Coffee Lover's Blog Hop week long celebration is almost like being hung over.  My craftroom.. a mess: 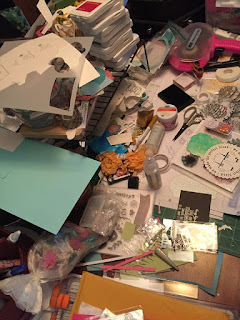 The Craftermath
As one of my coffee cohorts put it... yup.  Don't worry... this post gets prettier.
So I spent yesterday tidying up a little bit... emphasis on the word little.  And now.. or at least this morning, I had a whole foot square area in which to work.. so the tidying stopped and the creative work began.  I can't help it.  I'm easily distracted by sparkly things.. and my hurricane ravaged scrap room has plenty.. so I gave in.  Here's what I ended up with: 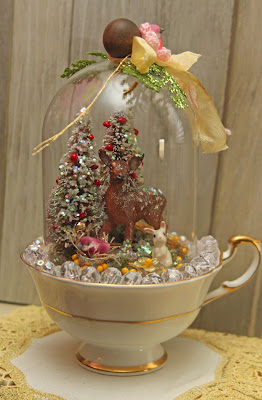 It's been since.. idk... the Fall or Winter hop I think... long enough ago anyway... I started what was going to be a snow globe .. the star being a little deer I purchased at Michael's.  I started my scene with glitter and Modge Podge and go so far as the point where I needed a little bunny and all work stopped.  I had nothing small enough.  I whined and stomped my feet.  I looked and searched... willing to pay for just the right little bunny wherever I found it... Etsy... Ebay... Goodwill... other second hand stores... maybe someone didn't realize how very valuable a tiny bunny is and was selling it and maybe even a whole big collection of dusty little woodland animals... no luck.  So I kept whining... and I was in the middle of whining to my then shiny new friend and lover of all tiny woodland creatures and anything else no one realizes the value of.. and she said.. "I HAVE a tiny bunny"... and my heart stopped.   She said, "I'll send it to you."  And when it came in my mailbox, not long after... in a box filled with all kinds of other crafty goodies... it was perfect! 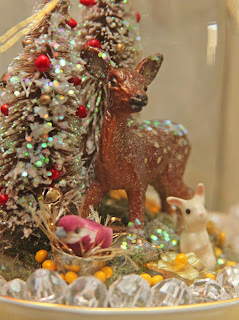 What you need to know about Mitra... she loves to shop at the Re-store in her town.  Who wouldn't.  It supports Habitat for Humanity and at her location not only do they sell old home building and renovating items, but they also have household goods.  You really do need to follow her blog to see all the wonderful things people just don't want anymore that she can see wonderful new beautiful creations in.  She snaps them up and turns them into works of art.  In fact!... if you go there now, you can see my bunny's cute companion.  So please do be sure to go there when you are done here.  You won't regret it... and also be sure to make it a regular stop when your blog hopping around because not only does she make fantastic and beautiful creations of all kinds... but it's always a great read and you'll leave feeling better... so you can find her HERE! 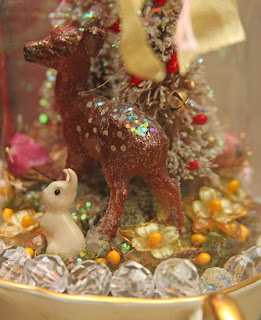 I tried to make my piece pretty from all sides... I mean the front is obvious... but I wanted the back and sides to be pretty too.  Originally it was going to be in a globe, but I was going to modge podge glitter around the back and sides and just leave an opening in front for the scene... but what I ended up with was just too dark... you couldn't see the best parts!  And that was before I had most of it done... I just knew it wasn't right and so there my project sat.  Not even half done.  With the most perfect bunny waiting for its home.. it sat until this morning. 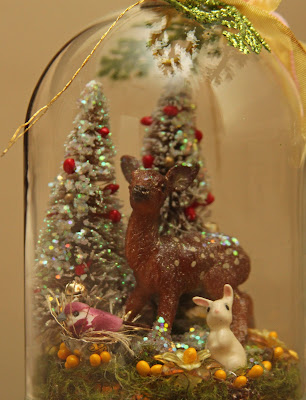 And then yesterday... as I was reading Mitras Facebook post about daffodils and spring... I got excited again.  I had bought these "cloche" type containers at a second hand store in the Phoenix area for a couple dollars.  But... it was too short.  And then I remembered the cupboard full of Grandma's old teacups that I'd been contemplating altering in some way because .. well... they're in the cupboard.  But do I dare do anything permanent?  Will I regret it?  Well, this worked out perfectly because I was able to put the top of the cloche over the top half of the base and the bottom half nestled into the cup and I didn't have to and didn't want to glue anything down because there is room in the base for on of those little battery operated tealights and since they don't last forever, I can easily dump out the beads I've filled in around the edges, replace the tealight... put everything back and if I ever want to I can just pop the whole thing out... although I don't see that happening because I love it the way that it is. 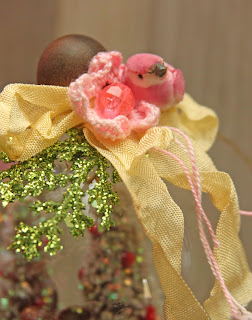 And I've used so many things that friends have given me including that pretty pink crocheted doily from my friend Tracey (her blog is also well worth taking a few minutes to check out); the cute little birdies and beads and flowers are from another friend who has no blog.  In fact, you won't catch her gluing too much or with glitter in her hair, but when someone she knew cleaned out a stash of beads, baubles and ribbons, she immediately came to me...lol. 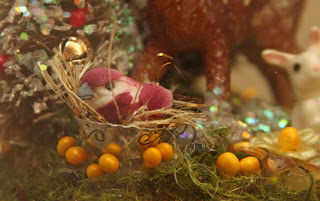 And those cute little birdies are laying in a nest they built inside a couple teacup charms I bought for ... idk... 25 cents maybe on Etsy along with some gold fibers they found laying around my room.  There are other bits and pieces too.. but by far... my favorite is the bunny.  Thank you Mitra!!!!  For your constant inspiration, your friendship and one cute little tiny bunny.   It feels so good to finally have a home for him. 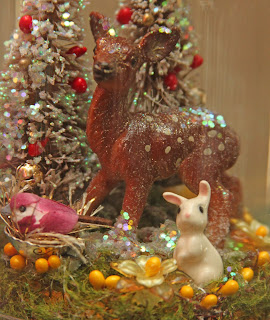 Thanks for stopping and listening (if you made it all the way through) and come back tomorrow for Atlantic Hearts!
﻿
Posted by Lisa

What a SWEET SWEET project....it's just a little treasure. Love reading where you found the cute add-ins. You've inspired me. I'm going to challenge myself to do something similar for the next hop. #lisamademeinspired

Oh goodness, I pinned this! The Restore is going to think I am batting when I run around there on Tuesday trying to see if any of the choches they are selling fit tea cups! I really dig the three friends here...They look like they are planning a little tea party! So pretty! Just makes me happy!

And your craftroom desk makes me happy too! I worked on mushrooms in between things today and it was like the glue gun exploded!!!

Well I DID make it all the way through because I did not want to miss a thing! This is so amazing and you have gotten into so many things besides just scrapbooking that I feel I am being left behind in the creative world. I really wish you were still here to share your talents and friendship. You are missed :-(

What a lovely item you have made. It's sparkly and pretty and sweet and just everything good. And seeing it in a tea cup gives a frame of reference for the size. Just gorgeous!

I can't believe I didn't make a comment on your blog with this one. Love how you used one of your Great Grandma's favorite cups for the base...this is simply beautiful. 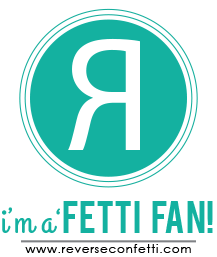 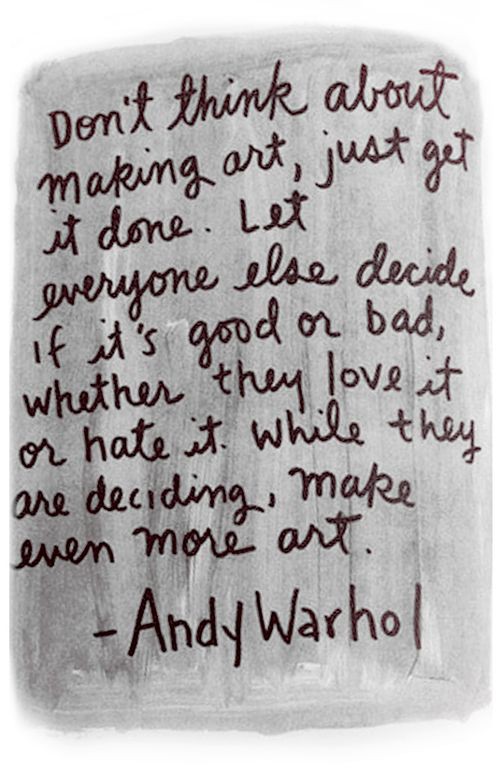